Balenciaga Might Have Found the Outer Reaches of Ugly Sneaker 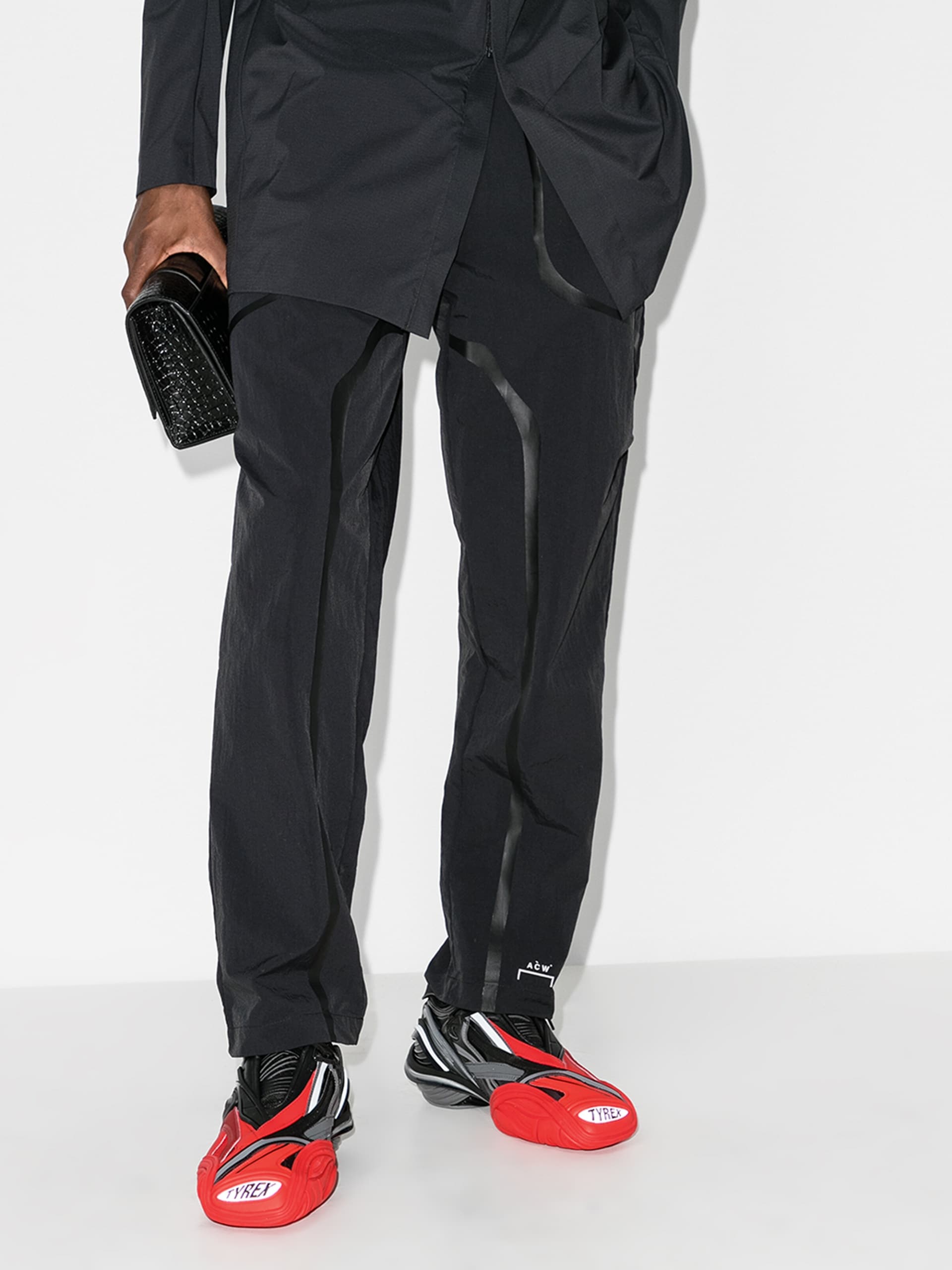 It’s black and red, crafted from shiny technical satin and bouncy polyurethane. Peaks and valleys race across the futuristic silhouette like craters on a planet. The shape is squished and compact, with a distinct curvature in the sole. It is, technically, a sneaker: the Balenciaga Tyrex Low, the latest out-there production from the always avant-garde designer Demna Gvasalia. And it doesn’t look like anything else in the high-fashion market—at least for now.

Gvasalia famously designed the polarizing Balenciaga Triple S, in the process turning big and ugly into the most sought-after silhouette in recent memory. Tracing the exact origin of a trend can sometimes be a fruitless task. But it isn’t an overstatement to say that the Triple S upended an entire industry. Or at the very least, it reconfigured its aesthetics. When the $900 ugly-chic sneaker first made its debut, it was mainly for eccentric dressers and obsessed sneakerheads. Then, the sneaker  built up enough momentum to become a full-blown phenomenon.

The pumped-up kicks started showing up on everyone from Pharrell to Jeff Goldblum to Migos was wearing the shoe. The New York Times dedicated a column to  one writer’s eight-month-long search for a pair. Both Nike and Adidas started reissuing once-forgotten silhouettes from the 1990s and 2000s—the type of chunky, unfashionable footwear you’d long see marked down at an outlet store. This time, the shoes kept selling and selling. New Balance, longtime makers of bulky running sneakers, put out a new ad slogan: “Worn by supermodels in London and dads in Ohio.” The era of the ugly sneaker had arrived.

The Triple S was so far outside of the lexicon of contemporary footwear design that it seemed destined to fail. And then, all of a sudden, you couldn’t open Instagram without seeing it. The Tyrex Low feels similarly out there. Even by ugly sneaker standards, it isn’t close to pretty. All of the standout features—an exaggerated square toe, that warped honeycomb heel, a bulbous caged upper—seem unsettling. It looks more like a rough draft of a cycling shoe than something you’d buy from a luxury fashion house. Yet we’ve certainly seen the style-forward crowd embrace weirder-looking items—and there might be a universe in which the Tyrex becomes Balenciaga’s next big hit.

Sneaker trends are fickle, and which head-turning fashion sneaker sits atop the footwear throne changes every couple of years. Over a decade ago, it was luxurious kicks that emphasized their dressiness. (The ones that Kanye West designed for Louis Vuitton in 2009 are a prime example.) A few years later, minimalist shoes like the low-top Common Projects Achilles were all the sartorial rage. There was the Triple S, of course. And then, in the last few years, mountain-ready trail sneakers have become the choice for the chronically cool: this magazine named the Salomon S/Lab XT-6 its sneaker of the year for 2019.

Is Gvasalia hoping lightning will strike twice, and this sneaker will be his next smash? Or is the meme-baiting designer just trolling the world of fashion? It’s hard to imagine other fashion labels and sneaker brands following suit this time. If anything, the Tyrex Low seemed destined for cult status akin to that of the Maison Margiela Fusion rather than something that will break into the mainstream. But crazier things in fashion have happened. At least, for now, the ugly fashion sneaker marches on—this time it’s just in different packaging.