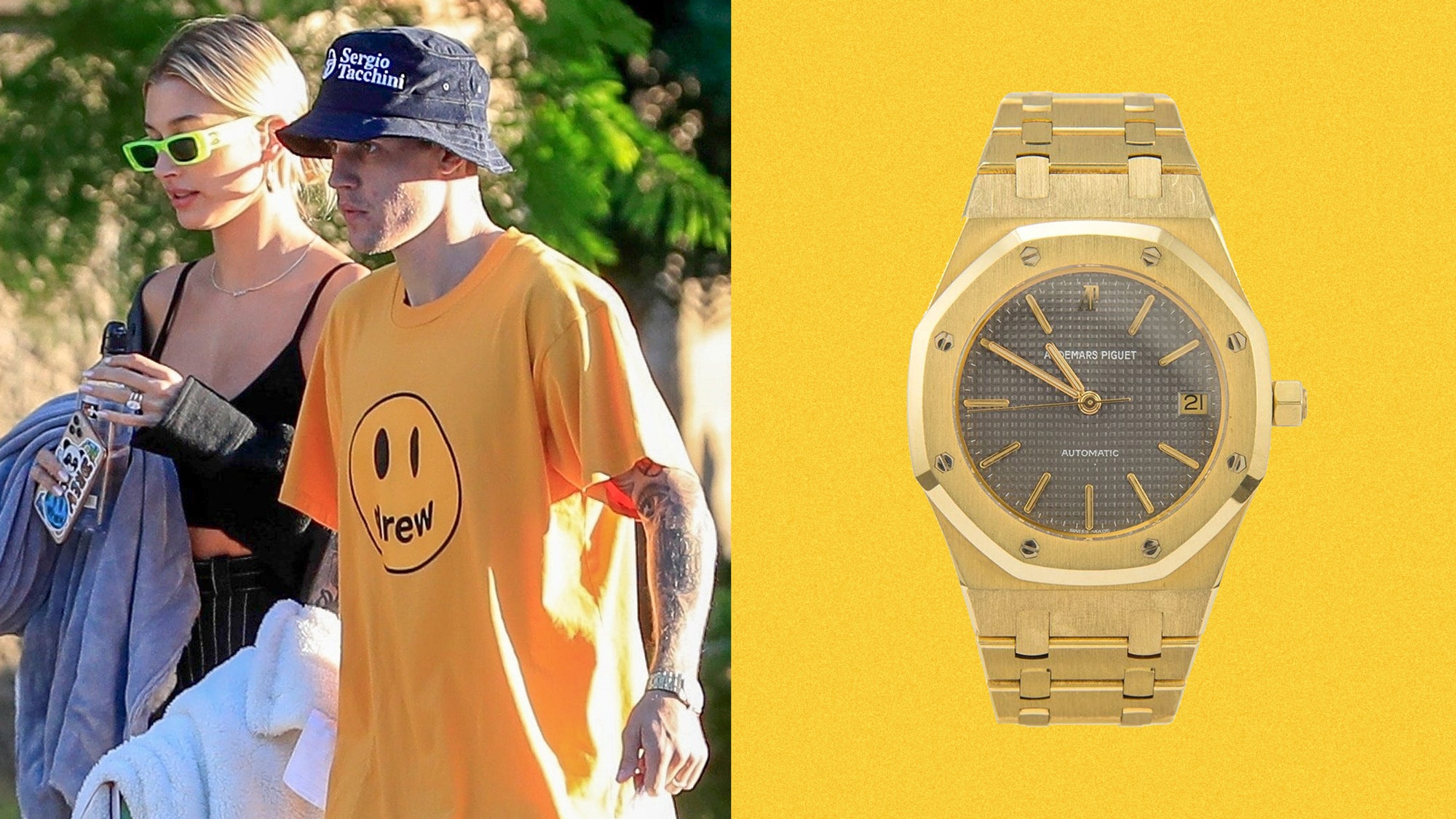 Welcome to Watches of the Week, where we’ll track the rarest, wildest, and most covetable watches spotted on celebrities.

A wedding registry is an amazing thing: just a long list of stuff the to-be-wedded want you to buy for them. Typically, that means an infinitely unspooling inventory of Le Creuset pots, pasta makers, Kitchenaid Stand Mixers in that color they’ve been eyeing, and a fancy decanter that will literally never be used. Some things just aren’t acceptable for a wedding registry, though—like a vintage watch worth tens of thousands of dollars. So, in celebration of his wedding to Hailey Baldwin, Justin Bieber bought himself a watch worthy of the moment. The piece is an Audemars Piguet Royal Oak reference 5402BA, a watch that is at least two-plus decades old and somehow still in pristine condition. Seems as if Bieber made two lifetime commitments this week. And what a week it was for watches: LeBron James wore a Richard Mille, Jimmy Butler took his talents to his South Beach and wore not three, not two, but just one really good watch, and Will Smith—no further explanation necessary!

Bieber bought his wedding present from Beverly Hills jeweler Jadelle. A representative there wasn’t able to say much about the watch beyond the fact it’s “a vintage rare watch”—no duh—from the early 1980s that still has its original paperwork. Bieber displayed great taste with this purchase: this is an incredibly simple watch, with just a date display at the 3 o’clock marker and the watch’s signature Grande Tapisserie dial—that goosebump effect on the watch’s face—in a concrete grey. TMZ reported that in the lead-up to the wedding, the Biebers ordered $1,200 worth of organic fruit drinks for their guests, referring to the beverages as “nuptial juice.” I’d argue that Bieber’s really got that nuptial juice now, though.

Most sports-related watches are named after the incredible athletes involved: the Rafael Nadal, the Lionel Messi, the LeBron James! Richard Mille is not like most other watch brands, though. A couple years ago, the watchmaker released a special-edition model of its RM 11-03 in honor of Fédération Internationale de l’Automobile president Jean Todt, who oversees motorsport organizations like Formula One. James is either a secret fan of how the FIA is run—Adam Silver, take notes—or he was drawn to this rare one-of-150 sapphire-colored Richard Mille.

Lil Uzi Vert’s collection of Patek Philippe watches is growing stronger every day. During his recent GQ photoshoot, the rapper wore a reference 5205 with an annual calendar and moon phase complication. Retail price: nearly $50,000. This week, the rapper showed off the deeply beloved Nautilus model in rose gold with a chronograph (stopwatch) function. If it could be found at retail—it can’t—the price would be $88,000. Collecting Pateks is not a cheap hobby, but it is sort of an obligation for a rapper who made a whole song, “New Patek,” about acquiring these pieces.

There’s been a lot of Jimmy Butler talk this week—mostly owing to the fact that his former teammate Joel Embiid lamented the absence of his BFF and the 76ers’ one reliable closer. Another thing Embiid probably misses? Butler’s great watch collection. The Rolex Daytona Rainbow has garnered loads of attention this year, popping up on late-night shows and Post Malone’s wrist. But while most celebrities have worn the new rose-gold “Rainbow,” Butler wore the rarer 2012 version in yellow gold to the Miami Heat’s media day. Sotheby’s sold one last spring for a touch over $250,000.

Like Lil Uzi, 21 Savage is a rapper with an appreciation for Patek Philippe watches. Earlier this year, he wore an Aquanaut in a tasty chocolate-brown color. This week, while attending and being honored at the National Law Immigration Center’s Courageous Luminaries Awards, 21 wore what is likely the most desired watch in the world: a Nautilus. The watch’s eight-year waiting list is now the stuff of legends, and with celebrities like Lil Uzi and 21 showing the Nautilus love, demand for the watch isn’t likely to drop anytime soon.

Now, this is a story all about how
A brand’s life got flipped-turned upside down
And I’d like to take a minute
Just sit right there
I’ll tell you how the Royal Oak became the prince of this whole watch affair
In west Switzerland born and raised
Designing watches was how Gérald Genta spent most of his days
Sketchin’ and drawin’ and relaxin’ all cool
And all designing some watches inside of his room
When a couple of executives whose brand was doing no good
Started looking for a plan in Genta’s neighborhood
They were in the midst of one little Quartz Crisis and the board got scared
They called Genta and said, “You’re designing a sports watch before tomorrow’s morning prayer.”

In other words: Genta designed the Royal Oak in a single night, it saved Audemars Piguet, became an icon, and now it’s sitting on the wrist of the Fresh Prince of Bel-Air.